Because of you, Evan dreams big

Your support touches the lives of many, just like Evan.

Evan has a wide smile and a zest for life. 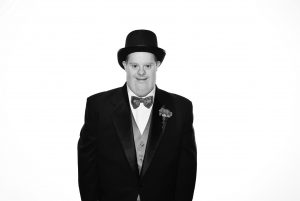 Evan serves on CPARC’s Board of Directors. He’s honored help the agency that’s supported him for more than 10 years. “I’m excited to help,” he says.

Usually a social butterfly with lots of hobbies, Evan says COVID-19 has been hard. “I miss getting out of the house,” he frowns.

Evan’s disappointed that so many things are canceled, including acoustic guitar lessons and playing at open mic nights at Castlerigg Wine Shop in Carlisle.

You see, he is the biggest (self-proclaimed) Reba McEntire fan. “I’ve seen her in concert a couple times,” he smiles.

His dreams of actually meeting Reba were dashed earlier this year because of the quarantine. Still, Evan plans to head out Pittsburgh next year to meet his celebrity crush!

There have been other big changes for Evan.

With help from his CIT job coach, Evan landed a new job at Scalles Restaurant.

“A lot of things are different,” Evan said. He’s looking forward to new opportunities. “There are a lot of new people.”

The workflow is a lot faster, and he walks to work every day. This is a benefit, Evan says, adding with a laugh that “exercise means it is easier to eat more.”

Evan dreams of living in his own apartment one day. “I’m ready to get my own place,” he says. For now, he lives with housemates in a CPARC home in Carlisle.

He’s also looking a girlfriend, and someday he’d like to start a family.