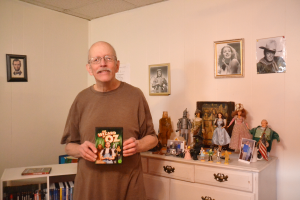 Here’s John in his apartment with some much loved collectables.

“Put ‘em up, put ‘em up! Which one of ya’s first?” John says with gusto while swinging his ‘paws’ as the Cowardly Lion. He can easily recite line after line of this scene from The Wizard of Oz.

Just like his favorite character in the movie, John makes brave decisions all the time. But, what John does best are everyday things – like pay the bills, organize his pills, and plan meals. These things he does with support from a team of staff at CPARC.

Denise helps John develop a grocery list every week. Most weeks, he’s sure to add supplies for “Breakfast at John’s,” which includes French toast and cocoa. Recently, he planned to purchase an olive loaf, applesauce, and chicken nuggets. “I haven’t had chicken nuggets in…well, I don’t know how long,” he adds. “I’ll eat them with rice.”

Through diet and exercise, which he says have been “hard,” John has shed some pounds. “John is committed to making better choices when he eats. He also walks every day,” Denise adds. You can often find John mowing the lawn at his apartment over the summer.

“I love my independence,” John exclaims. He continues to set new goals for himself. One new goal has been self-administering medications. Denise helps him organize his pills for the week. She proudly adds, “John’s been taking his own meds for two weeks now with no mistakes.”

John is just one of the many people whose lives you’ve changed. Your gift makes a difference.